In St. Petersburg, during the Third Eurasian Women's Forum, a meeting of the International Discussion Club was held
"Eurasian Union of Women - Regional Leaders" on the topic "The role of women in the development of regions of the world during a pandemic, postcoid period."
The session was moderated by Natalya Vladimirovna Komarova, Governor of the Khanty-Mansiysk Autonomous Okrug - Ugra, coordinator of the project "Eurasian Union of Women - Regional Leaders" of the Council of the Eurasian Women's Forum.
“Today, dialogue and increased cooperation between women - regional leaders of countries is a necessity. This will make it possible to identify and replicate the best practices, to combine the experience of the world's regions in the sustainable development of territories, to expand humanitarian and economic ties, ”said the head of the Autonomous Okrug.
Today, women leaders, representatives of government bodies, the diplomatic corps, public associations from 13 countries of the world, 10 regions of Russia are participating in the work of the discussion club in full-time and online format. Participants of the event discussed the need to create conditions in society for the active involvement of women in management. affairs of society and state. The speakers noted the role played by women's public organizations in drawing attention to the problems arising in modern society, the steadily increasing role of women in solving urgent socio-economic and humanitarian problems, in strengthening peace and security.

During the event, the following decisions were made:

- About the participation of the Association in the projects of the United Nations Industrial Development Organization (UNIDO);
- On the development, promotion and implementation of projects, including in the field of small and medium-sized businesses, ensuring the satisfaction of the social, cultural, health-improving interests of women;
- On ensuring conditions and opportunities for women to receive additional education in order to develop leadership potential and involve them in the development and implementation of projects aimed at solving socially significant problems;
- On the formation of an effective system of international mentoring in the process of retraining women affected by the loss of jobs as a result of the pandemic, by stimulating the participation of business representatives and the professional community in this process, including in the development of additional education programs, internship programs;
- On the replication of the best practices for supporting women's public initiatives, women's entrepreneurship in the regions of the world;
- On the organization of joint participation in women's forums, seminars, exhibitions on the activities of women in the development of regions of the world during a pandemic and in the post-ravine period;
- On providing information support for projects dedicated to women's topics through the portal of the Eurasian Union of Women - Regional Leaders: https://women-leaders.ru/ru/, social networks: https://www.instagram.com/ewf_leaders/;
- On the development of cooperation between the participants - representatives of the regions of foreign states in the field of economy, culture, healthcare;
- About attracting compatriots living abroad to the work of Russian centers, houses;
- On the creation of comprehensive training programs for women in the regions on the development of soft skills (flexible skills), including emotional intelligence, for women to more fully realize their capabilities and increase the role of women in the development of regions and human capital in the postform period;
- On strengthening the focus on STEM education for female students, including through the holding of STEM forums, to VEB.RF projects.

In addition, during the meeting, the participants turned to the organizing committee of the Eurasian Women's Forum, with a request to support the creation of the Public Diplomacy Fund "Eurasian Union of Women - Regional Leaders", as well as to support the initiative on the International Prize for Best Practice for the Preservation and Development of Native Languages ​​in anticipation of International Decade of Indigenous Languages ​​2022–2032 and contact UNESCO Headquarters in Paris, Government of the Russian Federation, to assist in its implementation.

Recall that today the Association includes more than 200 participants from 30 countries of the world, 28 regions of Russia, including representatives of the business community, non-profit organizations, health care, science, leaders of youth movements, cultural figures, residents of technology parks, parliamentarians, environmentalists and leaders of the territories. On the women-leaders.ru platform, women exchange practices, including on overcoming the economic consequences of the pandemic. Currently, the portal contains information about more than 200 projects tested in the regions and ready for replication.

Women leaders, representatives of government bodies, diplomatic corps, public associations from 12 countries of the world, 10 regions of Russia take part in the work of the discussion club in full-time and online format.
The event was held with the support of the Governments 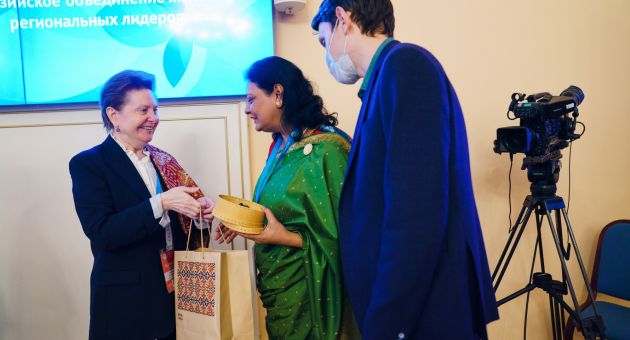